Background and my expectations
For 9 weeks of my summer vacation, I was an intern at WSP Taiwan. WSP is an international engineering consulting company, with a branch in Taipei. The scope of the projects this company works on is very wide, ranging from Google data centers to Terminal 3 of Taoyuan Airport, and their services include but aren’t limited to engineering design, procurement, and construction management.

I was hired to work at the company’s BIM department. Before getting started I wasn’t very nervous about work because at least I have taken more than one BIM classes in the past, however, I worried that as a non-native speaker I might face some language barriers when communicating in Chinese. Aside from that, this was the very first industry internship I had ever done, so I would also need to adapt to the work environment in Taiwan.

On my very first morning at work, I was processed by HR and given a tour of the office. I was very impressed by all the amenities in their office space, including sound proof booths, multiple meeting rooms, and cubicle areas. The most impressive part is the beautiful view of the Banqiao skyline that is visible from everywhere in the office. WSP’s office space takes up floors 19F and 21F of Panhsin building in front of Banqiao MRT station. This office space was completely brand-new since the company recently moved from Taipei Main Station into the Banqiao office space. I was then introduced to many other employees of the BIM department and to my supervisor.

My first few work tasks
My very first work task was to review the structure and features of the company’s PMIS (project management information system) platform, and to find different ways in which improvements can be made to the user interface and features. This platform is still partially under development, with new features being added for the purpose of visualizing BIM models, visualizing data relevant to the project, and linking to other proof of concepts being adopted by the company that may be relevant to the project. Therefore, I learned the importance of having a platform to keep track of the inflows and outflows of information, legal documents, and engineering drawings while also working around the deadlines and milestones set for the project.

For my second task, I was assigned to create a Dynamo program that can process and export Revit parameter values to Excel, for them to be edited and then reimported back into the Revit model through the program automatically. Currently, a BIM engineer can view and edit parameters inside Revit, however, other people working on the project who don’t know how to use Revit might be unable to navigate or even open Revit files. Being able to edit parameters through excel allows more people to review and edit data stored in BIM models, without having to know how to use Revit, or even having Revit installed. The Dynamo program I made works properly for small and large models, with a certain degree of limitation in the scope of parameters included. During tests, my program could process around 1000 parameters values edited in excel and input them back into Revit in a few seconds.

Plan and execution of my project pitch
The third task I worked on during my internship (and the task I spent the most time working on) was a Virtual Reality + IOT platform. The idea for this project came from discussing with Shyan, one of my supervisors, about how to leverage some of the many features of the brand-new Banqiao office that had been invested on, such as the sensors for humidity, C02, and temperature, as well as light panels illuminating the office which are connected to a server. The idea we landed on was creating a VR project with the BIM model of the brand-new office which could let people experience a virtual version of WSP’s brand-new office, visualizing the readings of the sensors in real-time, and toggling or dimming the lights in the VR program while also changing them in real life by connecting the program to their server. I worked on a small demo for the idea of this project, and then Shyan and me pitched it together to the WSP Taiwan CEO. The CEO liked the idea and decided to invest on VR hardware to further develop the demo, and also decided we should have the full program ready for the official office inauguration on July 28th to showcase it.

Me presenting my program to guests on the July 28th Office Inauguration (including 王明德, CEO Frank Lin, and others).

We worked on the program together and it was fully developed before the deadline. We presented it to the guests who came to the office inauguration, including WSP Asia’s CEO. The guests were very impressed by the program, and we got very positive feedback from the CEOs. I feel very honored that the CEO Frank Lin accepted and supported the idea we presented with Shyan for a VR IOT platform, and his kindness to let us present it at the July 28th office inauguration. I hope that after this pilot project there is more use for VR and AR by the company in the future.

The work environment at WSP is very friendly and considerate of their employee’s needs, and I had no trouble adapting to it. On a normal day, I would stay at work between 8:40 am and 6:00 pm. One thing that stood out to me is that in this company overtime is not required, and there were very few people left in the office after 6:30 pm. This reshaped my sleeping schedule, and it has given a more organized structure to my day-to-day life, and I have even kept the habit of sleeping and waking up earlier even after finishing my internship. The language barrier was never a problem with my coworkers, since my Chinese was good enough to communicate in most situations, and when needed there was always someone willing to translate a word or two. Special interactions, such as those with my supervisors or the CEO were mostly conducted in English. 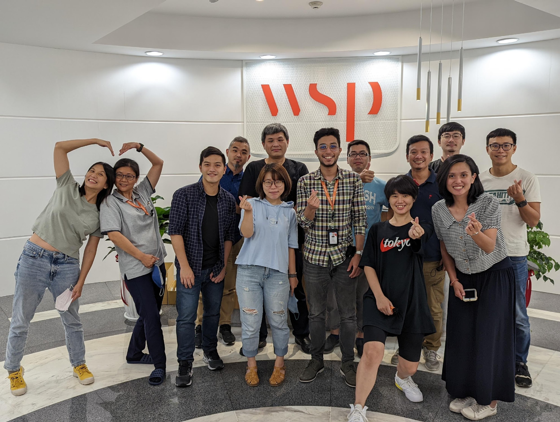 Final group picture with my coworkers on my last day of work.

My internship experience was very positive thanks to the kindness of HR and my coworkers in the BIM department. Throughout my entire internship, all my coworkers were very welcoming. I learned a lot from talking with them, eating lunch together every day, and joining meetings together. Louis Tu was a great supervisor and taught me lots of useful knowledge and guided me the entire time. Him allowing me to join meetings for proof of concepts or joint projects with other companies helped expand my knowledge of how new ideas are implemented in the industry. Finishing my internship, I feel very pleased with the professional and friendly bonds I have formed with my coworkers, and I felt sad saying goodbye. However, I feel more confident to tackle new challenges in the future using all these experiences that have helped me learn and grow as an engineer and as a person.